Canarian Off the beaten track

Unsurprisingly, this is an old Monastery perched high above Puerto de la Cruz in the neighbouring area of Los Realejos. From sacred beginnings, the 18th century monastery turned to catering in the 1980's, but as a restaurant it only really blossomed in 1983 after being taken over by the Columbus company. Now it's one of the north's most famed eating and events venues, more of a village than a single restaurant. In fact there are no less than five places to eat, drink and be merry.

The main restaurant - Comedor Principal - is itself split into different parts. There's the Confessionary, the Cave Room, Bodega and two terrace restaurants with palm top views over the surrounding valley. The specialities are Spanish and other International dishes, in particular roast suckling pig. If you 've never tried this in Tenerife, now's your chance. Just come with a huge appetite.

The Cafe al Mirador has a great terrace for sipping an aperitif while gazing down over Puerto de la Cruz. The international dishes are of extremely high quality and a daily menu del dia is available. Specialities include fillet steak in Burgundy, Chicken in cherry sauce and fresh fish with mushrooms and langostines. There's also a separate room for large groups and parties.

La Cabana specialises in fondues of all types - cheese, meat or fish. This is a popular choice for families and forms part of the Hacienda de San Pedro, which also boasts a Bodega and serves up a tasty line of paella, fish stews and seafood hotpots. There are also plenty of Canarian options such as the typical Conejo con Salmoreja, a sharp tangy dish of rabbit in spicy sauce served with Canarian potatoes, but you may find that you have to share your table with an uninvited guest. Ducks and geese wander freely and are not averse to joining you for dinner, defiantly watching every forkful from plate to mouth until you share the feast.

Other buildings house antiquated venues for wedding parties and other large get togethers. Naturally, because of its scenic setting and position, its very common to see a trail of various wedding parties trotting through the village and pretty gardens vying for the best photographic spot. If you fancy a fancy do, book well in advance.

In summary, this is one of north Tenerife's most famous and picturesque dining venues, with stunning views inside and out and numerous wine cellars that would make any sommelier pop his cork. 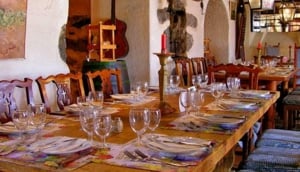 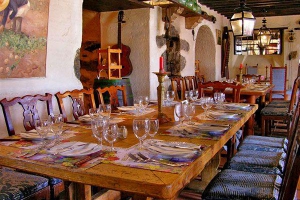 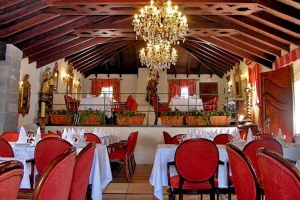 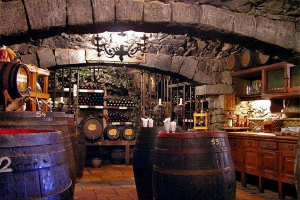 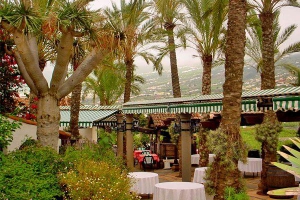