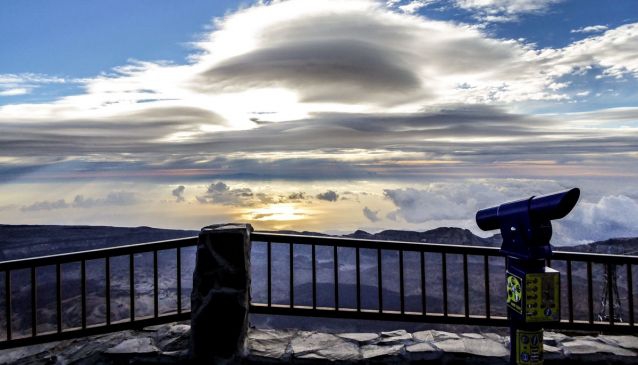 Andy Tenerife Walker from Tenerife Guided Walks welcomes you to the 'Island of the Eternal Spring'!

Not only can you find arguably the best climate in the world, but Tenerife is also the best place to relax and it's an interesting place for all kinds of exciting activities. The island of Tenerife, like all of the Canary Islands, is formed by a volcanic mountain chain in the Atlantic Ocean around 70km off the West coast of Morocco.

Tenerife has so much to offer to those looking for a hiking adventure. It's one of the most geographically diverse locations in Europe to choose as a walking destination. Starting with Mount Teide, Spain's` highest mountain at 3,718 meters high (12,198ft). Then you have everything ranging from luscious green valleys with natural springs and waterfalls, forest trails, shore line trails and even trails through the rainforest in the Mercedes Mountains. It makes you feel like you have travelled continents in a day when in fact you are within a relatively small travel distance from your holiday base.

The first 'hiking' routes as we know them today were created by the indigenous people of the island and were Shepherd paths which the Guanches used for herding their goats which were their main food source. Also, the paths were important trade routes between the 'Menceynaten', small kingdoms, of which there were seven in Tenerife. The first trails to the top of Teide were called the 'Ice trails' which the Guanches used to keep their meat products fresh.

On to hiking in Tenerife nowadays... Andy generally offers his clients three different options when it comes to choosing the most suitable hiking route in Tenerife:

For those of you who have no experience or looking for a slower pace, then Andy can organise easy scenic walks along designated paths throughout Tenerife. These guided walks in Tenerife can be graded on your ability and experience according to your preferences.

Ideal for those with a reasonable level of fitness. There are a number of reasonably challenging walks that can take you over rougher terrain, including volcanic and lava landscapes. There is a wide variety of different walks at different altitudes with very diverse geological areas which will challenge you physically and astonish you visually!

For those looking for more challenging walks in more difficult conditions there are a range of walks that will take you through steep passes over high mountains or through deep valleys. You also have the opportunity to ascend to over 2,500 meters walking at high altitude enjoying some of the most spectacular views available on the Island. Also offered is a 2 day overnight trek to go to Spain´s highest point - Mount Teide.

Please click on the tab above 'Most Popular Walks in Tenerife' to get an idea of what walking trips in Tenerife Andy from Tenerife Guided Walks has to offer. Don't forget, there are plenty more hiking routes in Tenerife which aren't listed there which Andy will be more than happy to take you on.