If you haven’t got a few million to splash out on a journey into space, take a trip to Tenerife instead, and be dazzled by the stars like you’ve never seen them before.

There’s an estimated 14,000,000,000 stars in our galaxy. Two thirds of the world’s population rarely see them, their glory smothered by a thick blanket of smog, bad weather or light pollution. 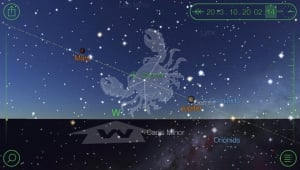 We can highly recommend downloading the Star Walk 2 app for the iPhone for the best viewing experience. Features augmented reality and responds to where you point the phone. If you click on any of those bright things in the sky, it will tell you all about it! Great fun.

So imagine, if you would, a warm Tenerife night with a glass of red in hand, eyes tuned to a velvet-black sky bejewelled with diamond-white sequins. Out of the corner of your eye, you catch the blazing trails of shooting stars, sparking as they strike the earth’s atmosphere. It’s a humbling scene. You realise you’re no more than a dot on an infinite landscape, but a privileged dot nonetheless, with a front row seat to this celestial spectacle.

But to be privy to this greatest show on earth, you need to know the right place, and the right time. Fortunately, Tenerife provides some of the most idyllic conditions on the planet; perfect places to gaze deep into outer space and investigate the facts and fantasy of a subject that has intrigued mankind since time began.

To catch the best performance, plan your trip just before a new moon when the sky is at its darkest. Check moonphases.com for details of the lunar cycle.

Away from the neon glare of the southern coastal resorts, the moonscape interior of this holiday island provides a great base for studying the heavens at any time of the year.

Shortly after sunset the sky over Teide National Park dims to a jet black and the first freckles of stellar bodies make their appearance. Within the hour, the entire overhead glimmers and sparkles like an overdressed Christmas tree. The Great Bear, Plough, Mars and Neptune are a few of the highlights easily definable with the naked eye.

If you want to stay overnight in the park, there’s only one option, the Parador de Cañadas del Teide (parador.es; +34 922 386 415). Fortunately it’s a good option. This state-owned hotel occupies prime position at the foot of Mount Teide, which with a peak reaching 3, 718 metres is the world’s third largest volcano (though a mere molehill compared to the 27-kilometre high Mount Olympus volcano on Mars – roughly occupying a space equal to the size of France!) Ask at reception and the staff will obligingly wheel a heavy duty telescope out into the open. On Friday nights, a guided tour of the stars is available free to hotel residents.

Closer to the shores, guests at one of the island’s top hotels, the Bahia del Duque can use the in-house observatory to gaze deep into the serenity of the night, escaping more than a million miles (literally) from the buzz of frenetic neighbour, Playa de las Americas.